Membership Meetings Typically the Anne Arundel Radio Club schedules two meetings per calendar month. The first, or 'business meeting' is held on the first Thursday of the month, while the second, or 'program meeting' is held on the third Thursday of the month. A Holiday Party (see Events) will replace the second meeting in December. On occasion meetings have been cancelled due to conflicts with national holidays. 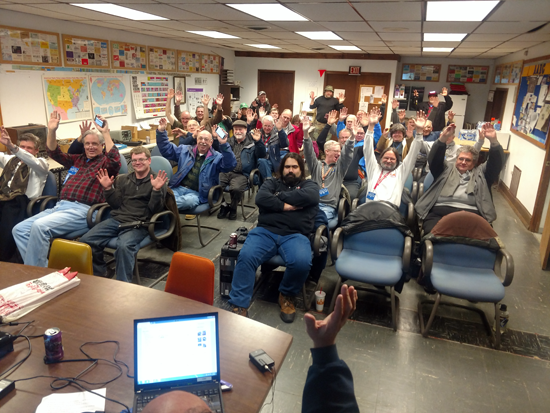 The members have voted, and overwhelmingly they want you to join us!

Meeting Details The 'busines meeting' is designated as such by the Bylaws, but in practice the Anne Arundel Radio Club has one or more programs of interest to hams presented at every meeting. Meetings begin at 7:30pm and generally end somewhere near 9:00pm.

What to Expect All General Meetings are called to order followed by "The Pledge of Allegiance". Directly following that all present are asked to identify themselves, including call signs if applicable, and visitors are encouraged to tell us a bit about themselves. If applications for new memberships have been received, they are typically voted upon at this time. This is followed by amateur radio related announcements, and typically by a presentation of interest to amateur radio operators, though not always directly related to 'ham' radio itself.

Board Meetings The Board of Directors of the Anne Arundel Radio club meet once per month on the second Thursday of the Month beginning at 7:30pm. Board meetings are open to the public for all issues not related to complaints or possible disciplinary action against members. In those cases the Board is called into Executive Session, and non-Board members not being called to testify in such matters are asked to leave. Luckily such sessions are extremely rare, and the General Membership is encouraged to attend Board meetings if interested. Schedule For a complete schedule of meetings and events for the Anne Arundel Radio Club, see the 'AARC Official Calendar (Google)' further down this 'Club Reference' menu.