What We Use The Anne Arundel Radio Club, though not required to do so by law, makes an effort to record each and every contact in an electronic logbook. We maintain two software programs for this, Ham Radio Deluxe (HRD) and N1MM+. HRD is typically used for everyday logging, while N1MM+ is designed for contests. 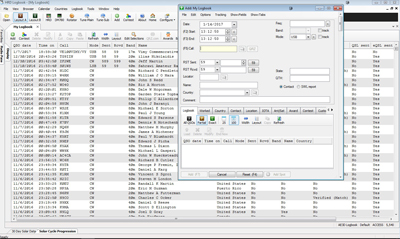 Ham Radio Deluxe HRD includes several modules, including 'HRD Logbook', which maintains a wide variety of information about the logged station, plus the rigs and antennas used to make the contact, and keeps track of QSL's of various types sent and received via ARRL's Logbook of the World, eQSL, regular postal mail, and via the ARRL's QSL Bureau. 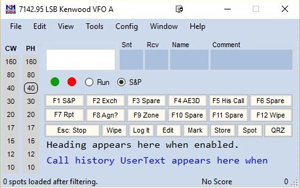 N1MM+ This free program can be configured to create simple and fast contest logs, which can be quickly turned into Cabrillo files for contest entry. N1MM's logs are also exportable into ADIF (Amaateur Data Information Format). These ADIF files can then be imported into Ham Radio Deluxe to maintain a permanent record of the contest contacts.

Networking Both of these programs network with other copies of the same software, such that a single HRD or N1MM+ logbook can be used for all contacts from any operating position. This is ideal for contesting with multiple simultaneous operating positions using multiple logging computers.

General Info Configuration of N1MM+, export and import of data, and management of QSL's will typically be accomplished by a Board designated individual. Meanwhile everyone who operates an AARC station should familiarize themselves with the normal operation of these programs. Those who might use the AARC Ham Shack to add contacts to their personal logs should familiarize themselves with the export functions of the N1MM program as well. Finally, while the AARC does not specifically endorse these programs, you would be correct to assume they were chosen for their features and because their popularity creates a large group of 'hams' who can help train new users.

Learn More Though we do not endorse either program, we will provide the following links so you may educate yourself on their use. Info regarding N1MM+ can be obtained from the N1MM Logger Website. For information on Ham Radio Deluxe, access the Ham Radio Deluxe Logging Software site.