The Holly Net is now the official name of the Anne Arundel Radio Club's former Morning Net, named in honor of Margaret "Holly" Bevan (N3MB), shown below our calendar at her 100th birthday party.  "Holly" was our beloved control operator for over 30 years.  The Holly Net runs weekdays from 7am to 9am.

The calendar below shows both the operational calendar and the Net Controlers assigned to make the Holly Net the best to-work companion in all of ham radio.  At least we think so.

Dave Grimes, K3HRT manages both operations and assignment of net controllers can be reached at holly.net@w3vpr.org 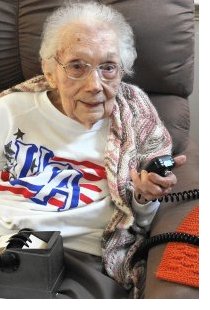 In the military in WWII, there were five Margarets in Ms. Bevan's office, so she received the nickname "Holly" based on her maiden name.  By the end of the war "Holly" was the ranking female in her branch of service as a Chief Petty Officer.  After the war she took up teaching, and eventually got into ham radio in the late 70's by taking an AARC sponsored course her son signed her up for.  In addition to her Masters Degree, "Holly" became an Amateur Extra and took the vanity call sign with her initials it it, N3MB..  She paid the ham community back a thousand fold, first at a Ham Arundel News editior, and later as a Volunteer Examiner, a Field Day greeter, and as the lone network controll operator of our Morning Net, year after year.  She finallly left us just short of age 102. There wasn't a member in the club who was not inspired by N3MB.  We still miss her.

While she was with us, "Holly" was about the only person in the club who didn't call it The Holly Net.  She knew well what we called it, but she was too modest to use that name herseft.  But we are not the slightest bid shy about singing her praises, and have now, finally, offically renamed this net in her honor as, The Holly Net.